The Iraqi industry started declining after hitting its peak in 1990, as the country started shifting towards consumerism and heavy reliance on the oil sector. Oil contributes to over 65% of Iraq’s GDP and 90% of the government revenues, while it only contributes to 1% of the employment. Whereas other sectors such as agriculture, forestry, and fishery contributed to only 2% of the GDP in 2018, although they provide 20% of the employment. This led Iraq to depend heavily on imported goods and lack self-sufficiency.

Manufacturing Percentage of GDP & Net Output Over the Years

The fragile economic situation, declining oil prices, high unemployment rates, poor services culminated in fueling the uprising of October 2019. Meanwhile, this series of events led to the launch of the “Made in Iraq” campaign. This campaign has influenced the Iraqi customer behavior to shift towards purchasing and consuming Iraqi products, supporting local businesses; thus, creating jobs for Iraqis and nourishing the private sector. However, in response to the aforementioned campaign, it is noted that there is no clear study of the different factors influencing customer behavior among Iraqis.

Made in Iraq, is a research that identifies and analyzes the main factors influencing the Iraqi consumer behavior in order to figure out what are the motivating and deterring factors when purchasing both Iraqi and imported goods. We also try to understand to what extent the “Made in Iraq” campaign influenced Iraqi society and encouraged them to support the local industry. Furthermore, we evaluate how gender, age, location, and educational level impact the Iraqi consumer behavior. The data collection took place in an online survey that included 2406 people.

The results show the majority of participants cared about the country of production when purchasing a product as 56% of them always checked for it. Whereas 40% checked the country of origin on a less frequent basis. Opposed to only 3% who were indifferent.

When measuring the impact of the “Made in Iraq” campaign, we observe that around 84% of the participants were positively encouraged to consume more local products, whereas only a minority of 15% were not persuaded to change their consumption habits. 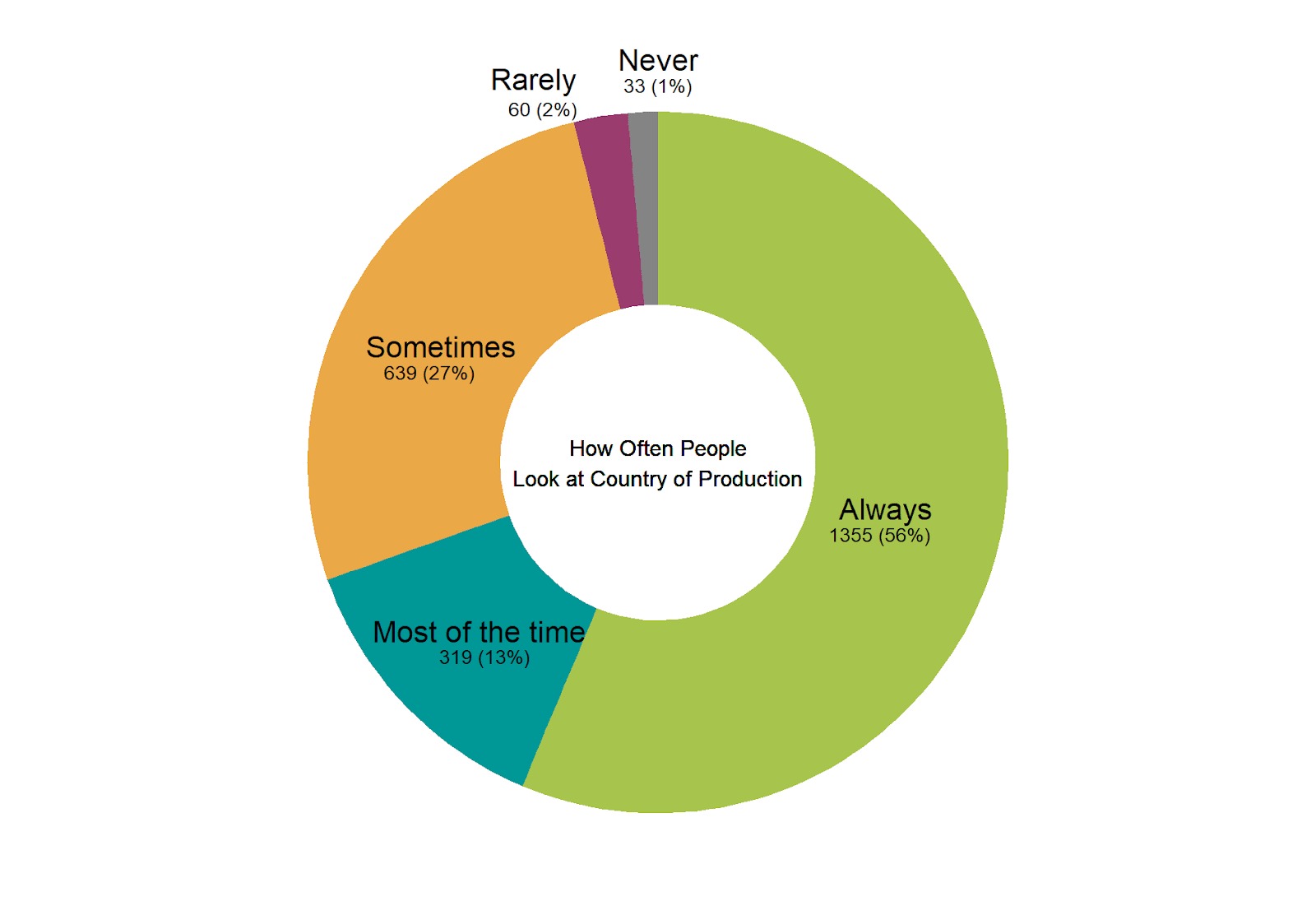 Iraqi Consumers Behavior after the Campaign 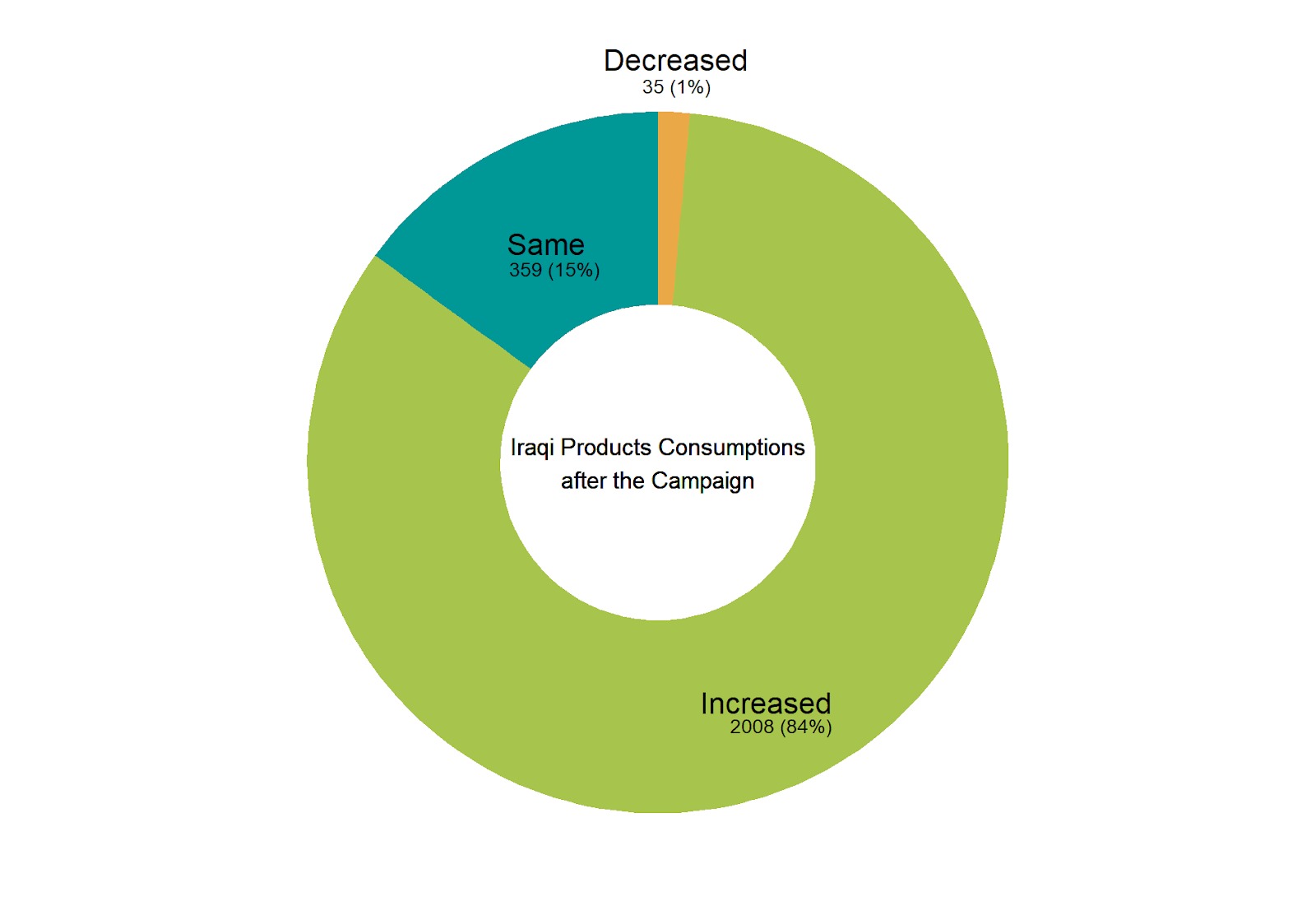 Participants ranked the quality as the most important factor that influences them to purchase products in general as over 60% of the sample ranked quality as the first thing they seek in a product. Price ranked second to quality, almost tied with the country of production but proved slightly more important by 1.5%.

When we assessed the decisive factor for purchasing Iraqi products, almost half of the sample showed the willingness to support local production and ranked “Made in Iraq” as the most significant factor prior to quality. Nevertheless, quality still ranked as an important factor, followed by price. We could safely assume that the Iraqi consumer would readily support the local industry, if the products proved to be of good quality and were fit for the purchasing power of the Iraqi consumers.

The analysis also showed that females appear to be more supportive of the local industry than males but not by far off, while they were more indifferent towards the price aspect of the Iraqi products as only 6.5% ranked price as a decisive factor compared to 12.7% of males.

To further gain an understanding of the Iraqi consumer, respondents were asked to rank the deterrent significance that stops them from purchasing a product in general whether it was local or imported. Around 53% of the respondents ranked quality as the most significant factor that leads them to avoid purchasing an item. Followed by packaging as 11.9% of the respondents ranked it as a decisive factor, and price which ranked behind packaging by a little difference as 11.6% of the sample finding it significant.

Moreover, when we take a look at the decisive factors that lead the Iraqi consumers to avoid purchasing Iraqi products, quality proved to hold its place as the main discouraging factor. Notably, packaging ranks second as 18% of the sample chose it to be a deterring factor. Followed by reputation and availability. Whereas price ranked as the fifth factor that leads people to avoid purchasing Iraqi products compared to third place when purchasing a product in general.

When we assessed these factors while considering the gender of the participants, we observed that women were more indifferent regarding the price as only 3.8% ranked it as a decisive factor to avoid Iraqi products compared to 8.46% in men.

Another worth mentioning distinction is found between location when it comes to price and reputation. Participants from cities other than Baghdad took price as a more important factor to avoid buying Iraqi products with a total of 7.95% and 5.71%.

This research aims to understand the consumer behavior of the Iraqi individual, in order to provide those who might be interested among producers, manufacturers, and stakeholders with the necessary insight to improve and raise the standards of their products to fit the Iraqi market.

The research identified many valuable distinctions between the Iraqi consumer behavior towards imported and local products. The research has found that the packaging factor ranked higher as a discouraging factor that led the customers to avoid Iraqi products compared to other products with 18.08% and 11.92% respectively. Therefore, producers should take into account the importance of the packaging.

Meanwhile, product availability was significantly more important in Iraqi products compared to other products, it was ranked as the 4th decisive factor to avoid Iraqi products by 7.73% of the respondents compared to less than 1% of the sample who ranked availability as a discouraging factor when purchasing a product. Whereas high price ranked less important as a factor to avoid Iraqi products compared to imported goods. Hence, the Iraqi individual would readily support the local industry, if producers cared about the customers’ main consumers and provided the Iraqi market with high-quality products of good packaging and reputation and abundantly available.

Made in Iraq was one of the largest campaigns to support iraqi produce and products. This campaign rejuvenated the market and stirred the community to support local goods, however, its effect has not been investigated until  over a year from its launch.

Posts that supported national products were in 3 main areas:

Three shared themes and one specific theme emerged from analyzing the comments on the aforementioned types of posts. The shared themes are seen in all of these posts about national products but the dominance of each theme varied depending on the type of the post and as detailed next.

This theme dominated the comments on posts that shared details about a new development or breakthrough in production. The quality of the national product was the material of the sarcastic, underestimating comments followed by the price. Some considered sharing such news as shameful and made the national products look even worse.

‘You consider this a new development when it has been used for ages in other countries? You should be ashamed of that’

These comments usually sparked arguments and the tone became hostile and personal after few comments.

This theme can be seen in life story posts. The commentator usually mentions how the prices of certain products have soared dramatically after the support the producer/manufacturer obtained. People did not show compassion for the challenges the producer is facing nor provided any possible solutions to overcome them. Moreover, some even hoped that the producer gets affected negatively and ceases operation entirely. The replies to these comments were divisive. Some agreed with the commentator while others offered an explanation for the rise in prices.

‘You support the national product and stop purchasing non-Iraqi products, the merchant doubles the price instantly. Let their products rot’

‘Don’t stop importing products from other countries, at least we can afford the prices and eat many varieties. Once the imports stop, the greedy sellers will double the price’

This theme is found where production numbers are found. People expressed their concern about losing the products due to sabotage. They usually referenced the incidents of fish death and wheat fields fires. The tone of the comments was defensive without expressing the feared culprit in such incidents. They also used metaphors to express this fear.

‘Wait for a few days and fire will catch these facilities.’

‘Just like the wheat fields fires, this will be lost and we will have to import it from other countries’

Some people expressed frustration with the lack of protection for such projects.

This theme is seen only in posts where the number of exported products are shared. The tone is satirical with intimidation and surprise sometimes. Commentators shared the same idea of exporting raw products and importing them again in another form. Some pointed that national-sufficiency is more important than exporting products while others pointed that the whole exportation process is corrupted as non-Iraqi products are exported as Iraqi products.