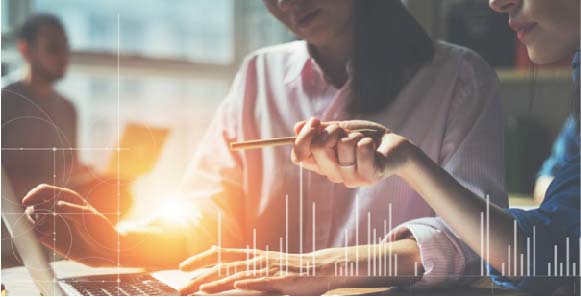 Iraqi Women in Numbers: Analyzing the Current Status and Identifying the Way Forward

Numerous setbacks have denied women an equal opportunity to rise and compete with men. Many social boundaries were drawn around women hindering their growth within integral aspects of life. However, few examples have shown that when women were given a chance, they could constantly innovate and be an essential part of society's story. These attitudes towards women started to thaw in the mid 20th century; that process has been ongoing ever since.

Iraq has been slow in that regard. Although, there were many individual cases in many fields that proved that when women are given space can excel and demonstrate their competence. When it comes to the business ecosystem, the whole ecosystem is still young and fresh. The chance to integrate women into the ecosystem from its inauguration is high if the necessary steps were taken to ensure that the culture of inclusivity is applied.

In this report, we are trying to give an overview of women in Iraq, their demographics, education, employment, Information and communications technology (ICT) skills, and health. To understand what are the challenges and the steps that need taking to improve the overall conditions and provide women with equal access to resources and opportunities, enabling them to take their role in the ecosystem. 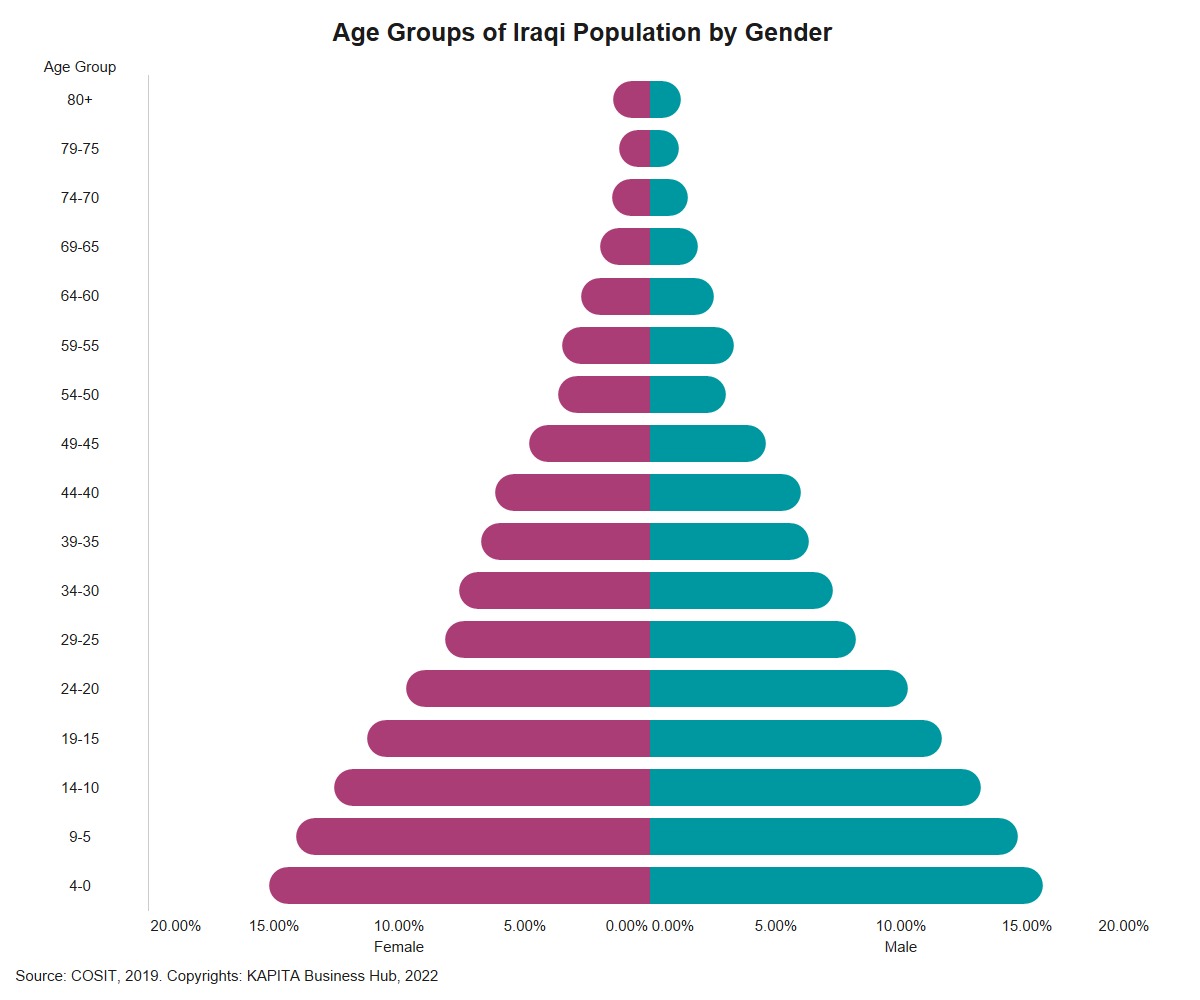 Women have been historically underrepresented in education in Iraq and the MENA region. However, According to UNICEF's Iraq Education Fact Sheets, the literacy rate of youth females (15-24) is 78%, yet, only 53% literacy rate for those below the poverty line and 68% of the ones living in rural areas. This can indicate a correlation between access to finances and education when it comes to female youth’s literacy. Another issue facing literacy in Iraq is early marriage; around 46% of women who married between 15 to 18 were literate, and 63% of those married before 15. 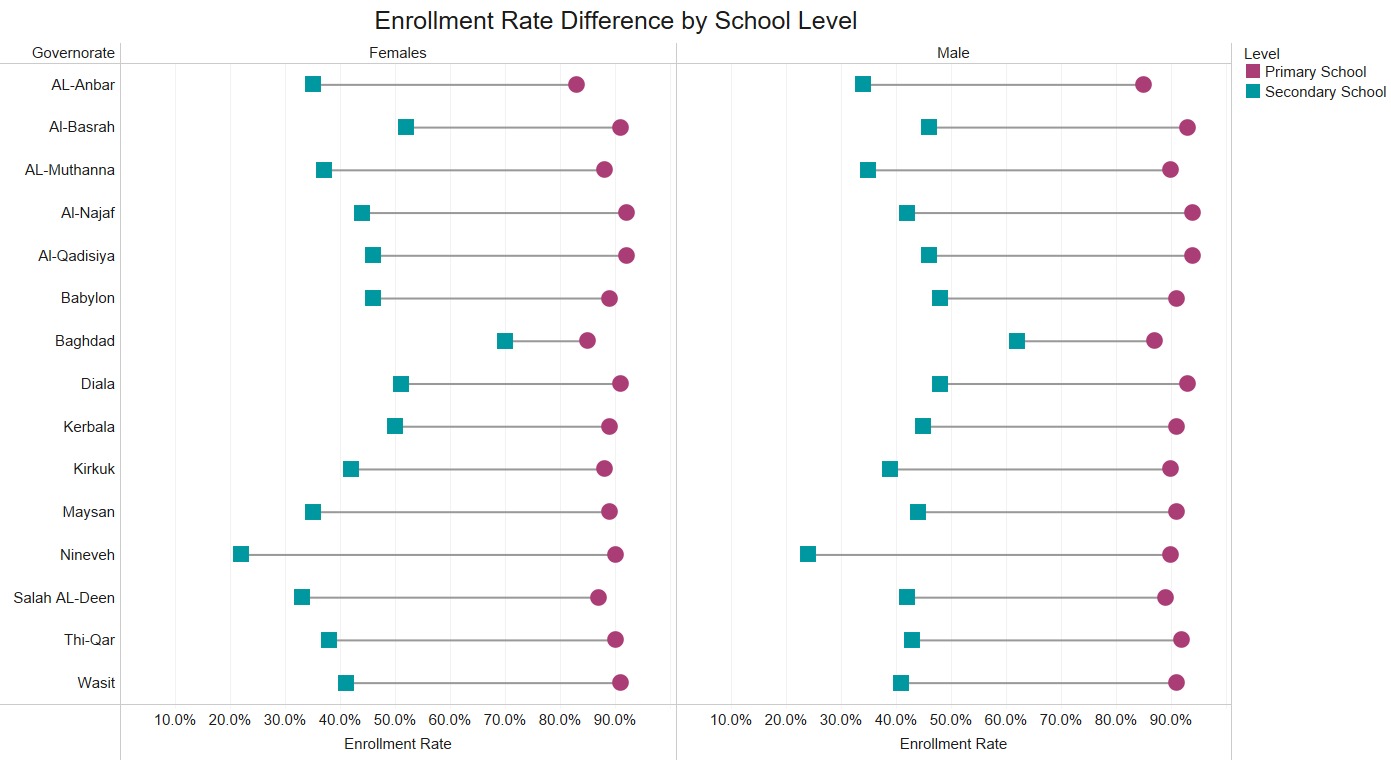 The issue of early marriage is echoed in the enrollment of female students, just as in illiteracy. Almost half of women who married before they were 18 did not enroll in schools. According to data from the Central Statistics Organization, in the 2019/20 primary school year, 48.63% of admitted students were females, accounting for 555,053 female students in all public, private and religious schools. While 47.42% of existing primary school students were females, accounting for 3,147,138 of the existing students in the aforementioned types of schools. 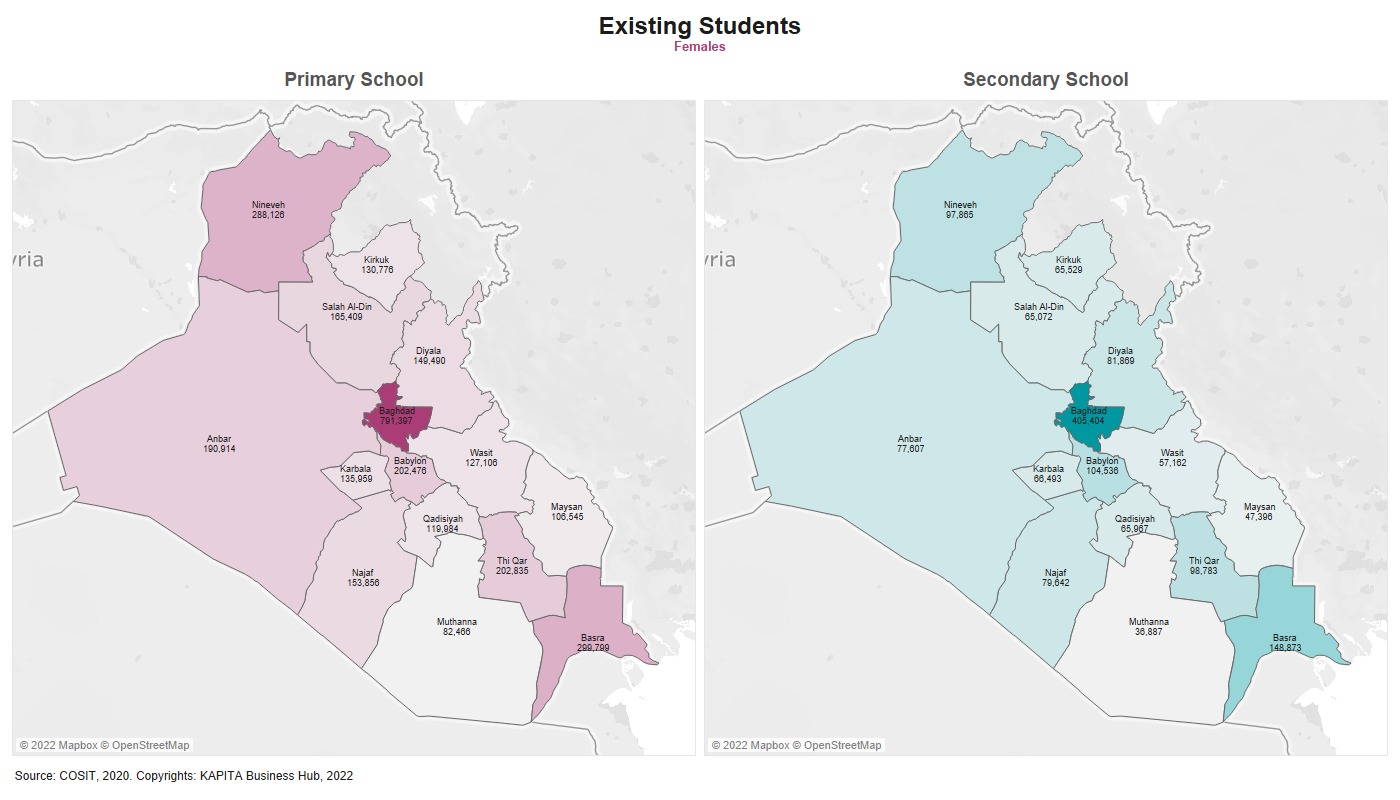 Females Out of School and Dropout Rates

Data provided by Central Statistics Organization shows that the average rate of female students dropping out of primary school, in the 2019/20 school year, in all public, private and religious schools, excluding the Kurdistan region, is 1.9%.

The average rate of female students dropping out of secondary school, in the 2019/20 school year, in all public, private and religious schools, excluding the Kurdistan region, is 2.2%.

When broken down into governorates, the highest female dropout rate at the primary level is in Babylon, with 4.7%. While for secondary school level, Diyala takes the lead, with 3.5%. 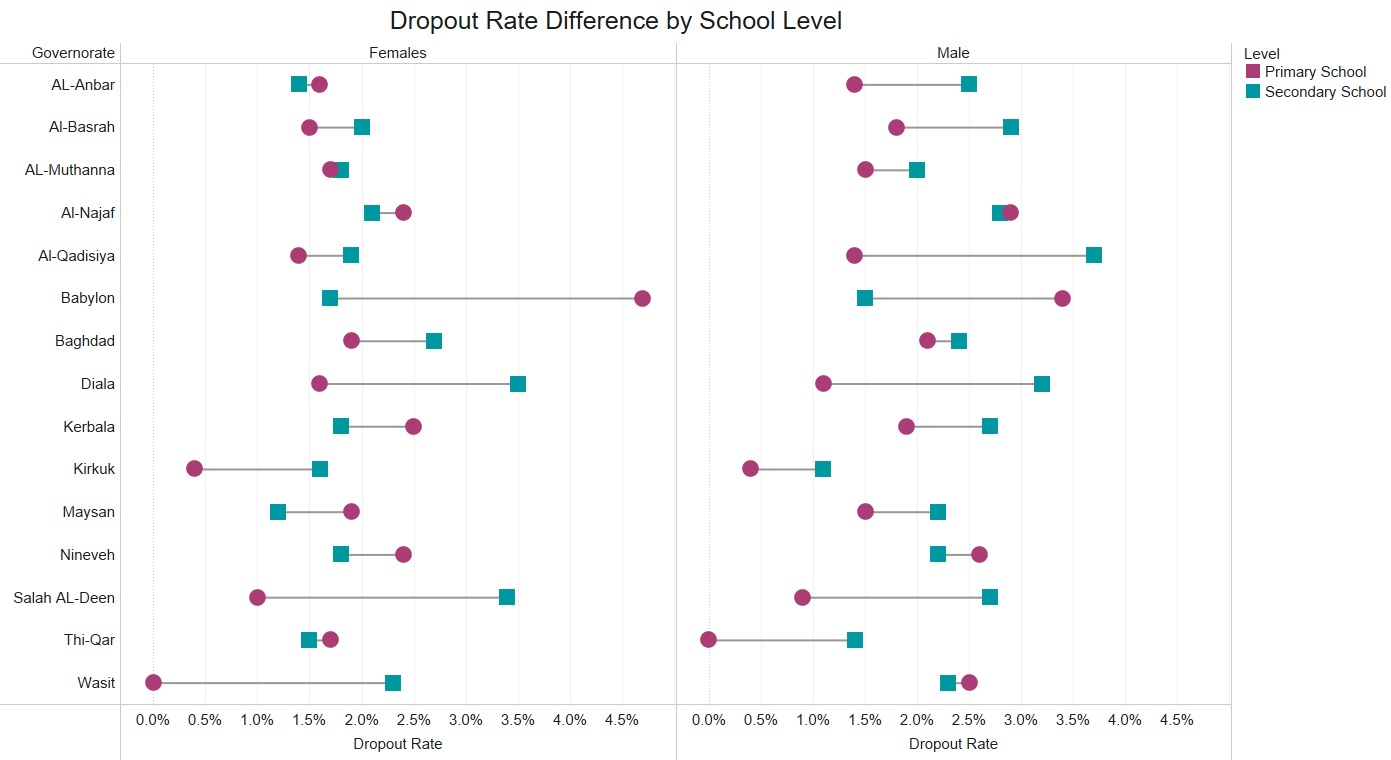 Many of the major fields of university education have a high number of enrolled female students for the academic year of 2018/19. Pharmacy has the highest percentage of female to male enrolled students, with 67.2% of students being female, followed by Dentistry with 65.94%, and Medicine with 61.33%. However, Law and Engineering have lower percentages of female students, with 25.61% and 41.69%, respectively. There is an apparent inclination towards certain professions that are often associated with more stability for women.

Women employers represent only 0.2% of female employment compared to 10 folds of this percentage in their male counterparts, indicating a significant gender disparity and the existence of glass ceilings preventing women from rising to leadership positions. 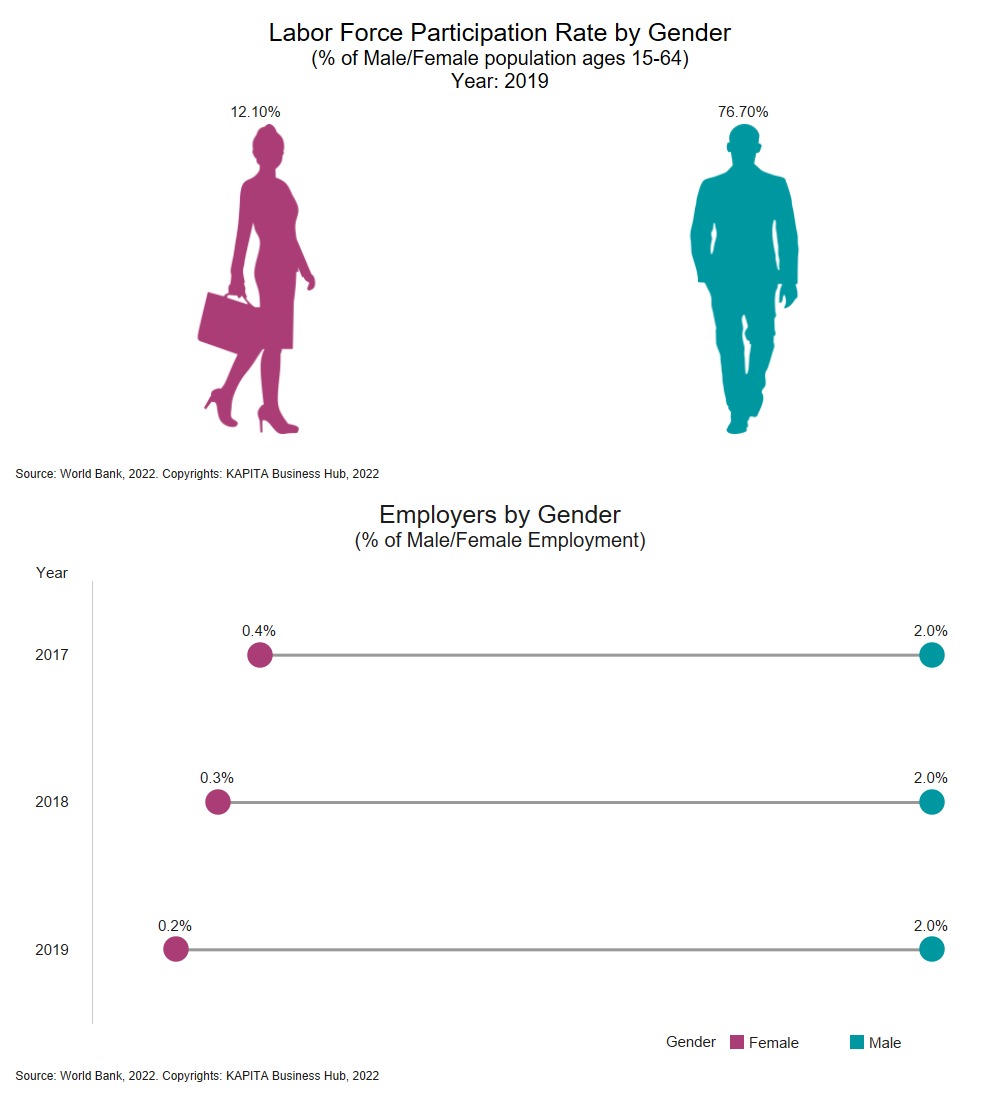 According to a joint report by UN Women and Oxfam, 94% of employed women are working in the public sector because of the stability and guaranteed labor law rights it offers. While in the private sector, although the rights exist, they are not as guaranteed nor enforced.

Within the whole context of the private sector, only 2% of employees are women, 71% of them have little to no education. Most working women in the private sector are employed in the agricultural sector, a total of 15.10%, while 43.7% of them are in rural areas.

According to the UNDP, the likelihood of women being more active economically is higher for rural women than urban women. However, they face more significant challenges regarding education barriers and food insecurity, and they are more likely to participate in informal and unprotected economic activities. Therefore, women in the rural agricultural sector are rarely in control of financial transactions and resources. On the other hand, due to the consequences of conflict, which create a relative absence of men on the farms, women have the chance to be active in the market, buying, selling, and negotiating, allowing them to have more agency. Nevertheless, it was reported that working women face new challenges when it comes to being financially independent because they are expected to fulfill their gendered roles within the household as well.

The aftermath of the 2014 ISIS invasion has a massive toll on women. Women are forced into being the heads of households due to factors beyond their control. Many women are being denied their basic human rights, such as access to identity cards and official documents, which is causing them to be unable to work, move freely, inherit property or pensions, and often it extends to their children being unable to attend school, obtain medical care, and are also at risk of being stateless. Therefore, due to these specific circumstances, many of these women are working within the informal sector.

A survey conducted by a research team for The International Journal of Academic Research in Business and Social Sciences regarding Iraqi women entrepreneurs found that 35.5.2% of the respondents held no academic degree, 30% held an undergraduate degree, 8.5.4% held a diploma, 17% held a Master’s degree, and 4% held a Ph.D. The same research surveyed women about their experience in the entrepreneurship field. The results showed that 55.5% had no experience in entrepreneurship, 23.5% had 1-5 years of experience, while 6 to 10 years and 11 and above both scored equally with 10.4%.

One of the main issues hindering women’s involvement in the entrepreneurship ecosystem is financial support. As previously mentioned, women tend to be less financially independent. This aspect, coupled with various other factors, like lack of funding affect their chances to start their entrepreneurial ventures.

In a survey done by KAPITA’s research team, on a scoring system of 1-5, the highest score indicating positive answers, in regards to basic ICT skills assessment. Women had a higher average than men in web search and video conferencing skills, while lower scores in email communications, word processing, and spreadsheet skills. While assessing the sources of knowledge in basic ICT skills, women scored higher than men in gaining skills through training and college, while men had higher scores with self-study, and both were on equal footing in gaining skills through the workplace.

The aforementioned indicators show that, in Iraq, there seems to be a gap between men and women in ICT skills. There is an issue in the shortage of ICT skilled women, which led to the introduction of a few initiatives that are trying to combat this issue. According to the Reality of Information and Communications Technology in Iraq report by KAPITA’s Research Department, the interviewed experts believe that women are less encouraged to enter ICT domains as those domains are stereotypically believed to be more suitable for men. This belief resulted, in actuality, in steering women away from these fields and caused them to be less equipped with technical skills. 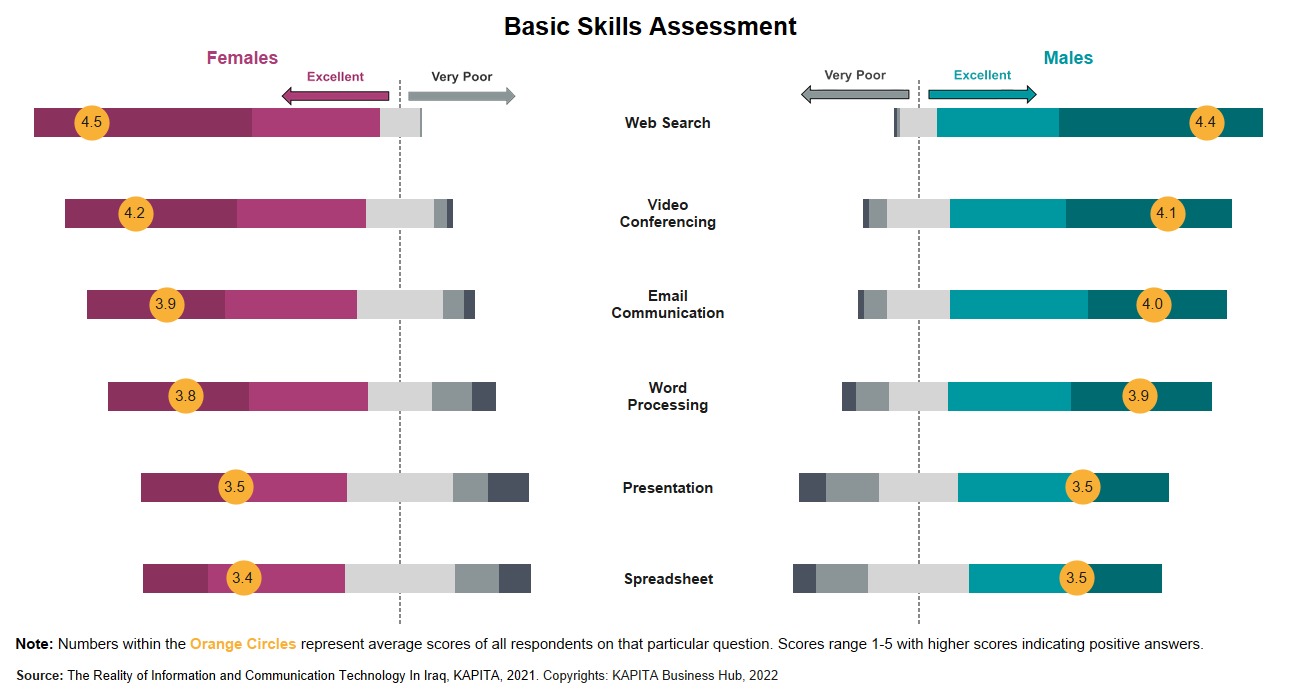 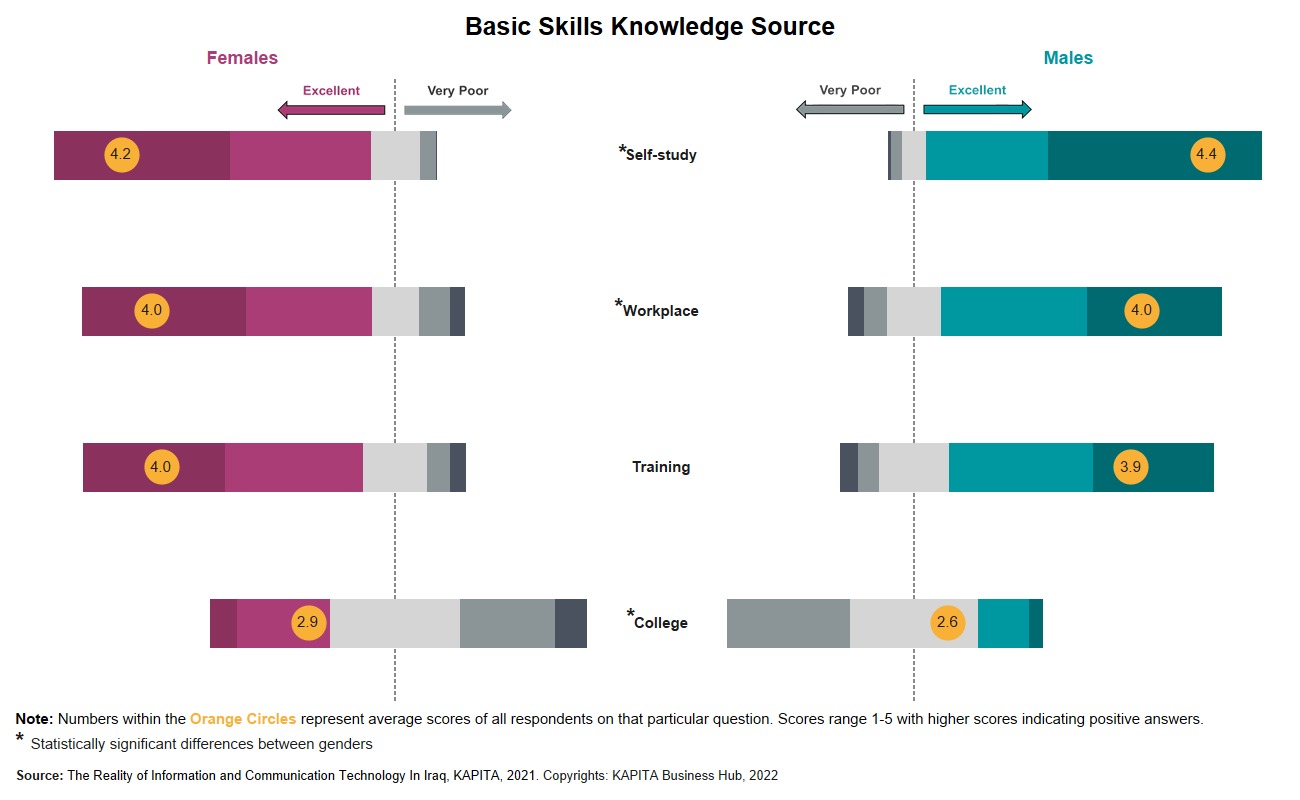 In general, almost half of women who never attended school married early. Moreover, nearly half of all illiterate women were married before turning 18. Women with secondary education and above reported only 6.8% of them who had an early marriage, to 33.8% for uneducated women.

There is a lot to be done to improve the situation of women in Iraq. Although a core part of society, women seem to be underrepresented in a lot of aspects of life in Iraq. While demographically, they represent almost half of the population, their integration would only mean a better future for everyone in the country, as they will serve as fuel to ignite the engine of the economy further.

One of the main issues that need to be addressed is early marriage, as it affects the educational prospects of many women. Its correlation with dropout rates, illiteracy, and levels of completion is alarming.

Also, the lack of formal employment opportunities for women should be tackled, and ways to make the workspace safe and accessible for women should be a priority. At the same time, legislation frameworks should be set in place to regulate the informal sector and transition the women working within into more formal jobs that could bring them under the umbrella of the labor laws. The private sector companies should also implement policies to attract and retain their women employees and provide them with the support needed, from a healthy and safe working environment to the right to maternity leave and childcare support. Moreover, many women should be encouraged to start their own businesses and delve into the entrepreneurial scene. There should be programs that target women specifically or offer a quota to women, as well as providing them with financial and investment opportunities.