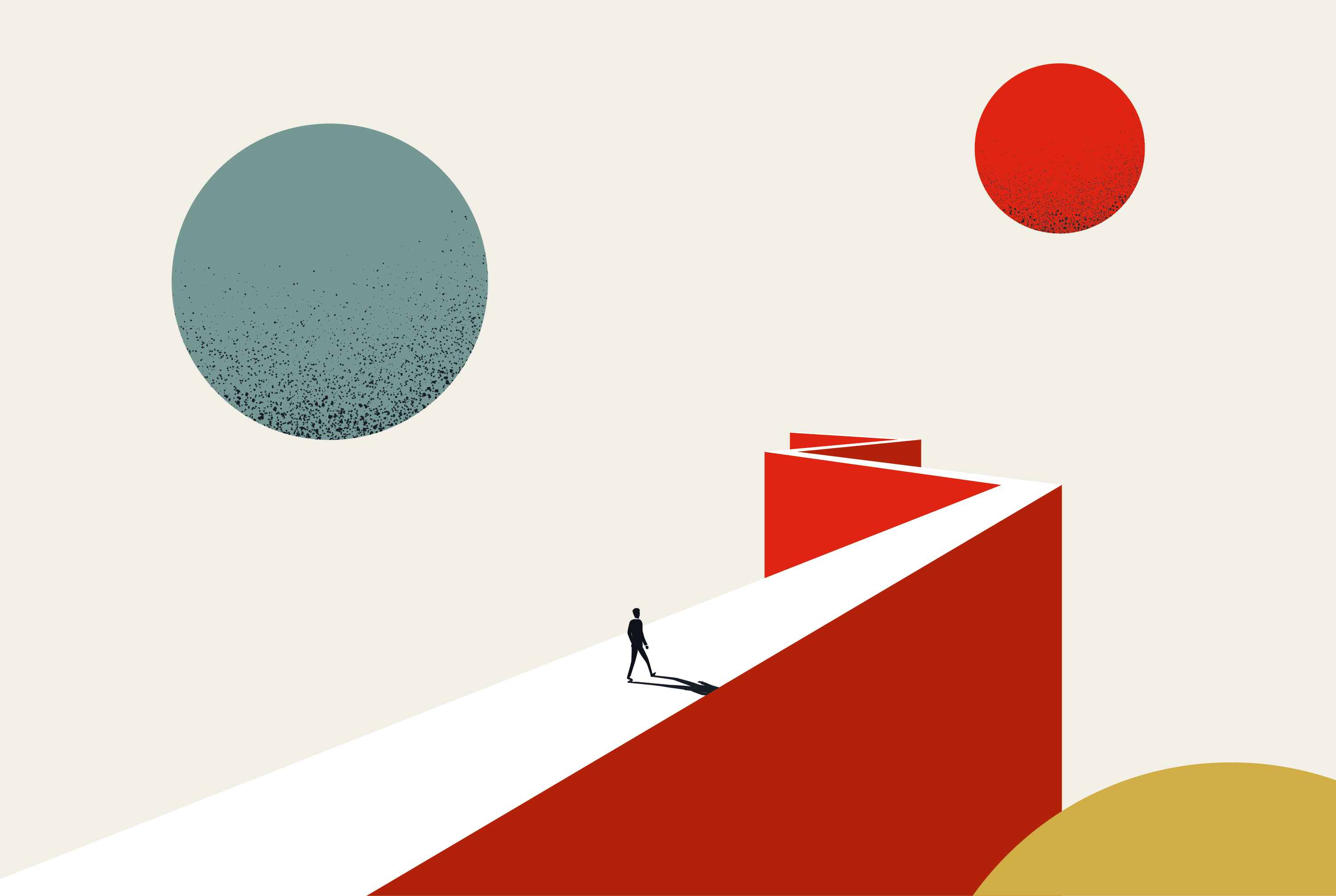 The Iraqi entrepreneurial landscape has been evolving over the last two years, withstanding, and sometimes overcoming, national and international challenges. The COVID-19 pandemic has affected global economies at large, including Iraq. While the increase in the exchange rate of the United States Dollar (USD) to the Iraqi Dinar (IQD) has affected the national economy. These incidents cast a shadow over the entrepreneurial journey in Iraq, yet, there are always opportunities that could be captured amidst the uncertainty.

This research is an updated, quantitative assessment of the Iraqi Entrepreneurs Journey: An In-Depth Analysis that was published by KAPITA in July, 2020, which was the backbone to understanding the problems, solutions, opportunities, and challenges that entrepreneurs face in the Iraqi business ecosystem. Two years later, we are providing an updated, yet in itself, a new version to complement the previous findings with current insights. To understand the characteristics of the Iraqi entrepreneurial world and provide the stakeholders, investors, researchers, and casual onlookers a detailed and straightforward picture of the advances within that world.

Age, Gender, and Number of Founders

The majority of founders were individual founders amounting to 60% of the respondents, the rest were between 2-3 founders and a minority of 3-5 founders. When it came to gender, women were underrepresented, with only 24.5% of founders. This might be due to several reasons, including social constraints, lack of technical and financial resources, and lack of available online data that could be vital to their understanding of the market, amongst other issues.

Academic Background and Its Impact on the Startup

The current findings indicated that the vast majority of founders were working in a field unrelated to their studying field. The majority of respondents who answered that their field of study was not the same field that they found their startup in, claimed that “[they] wanted to apply [their] innovative ideas (which are in a different field than [their] study)” as the reason for them to start their business in a different field.

Most respondents said that their academic study did not affect their startup (37.74%), while the rest answered that it had a moderate (28.3%), minimal (18.87%), and major effect (15.09%) on their startups, respectively. This can also denote an issue in regards to entrepreneurial education within the educational system. 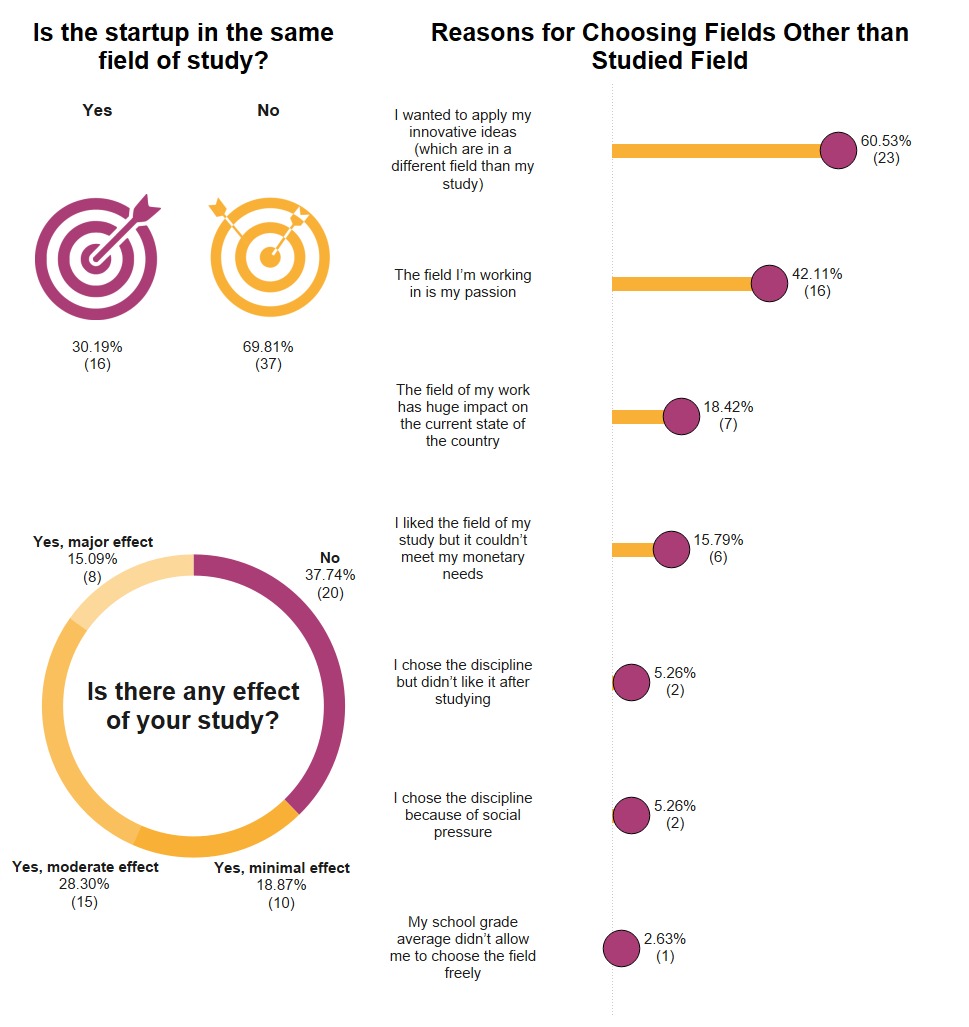 The versatility of sources of knowledge leads to the development of skills and mindset that help in understanding the market, the customer, and the product much better than being limited to a single source. Academic education is expected to be a pillar in developing the skills to launch a startup. However, the current findings indicated that academic study was ranked fifth as a source of knowledge while self-teaching was ranked first and previous job experience as second in level of importance to respondents, followed by events/workshops third and online courses fourth. 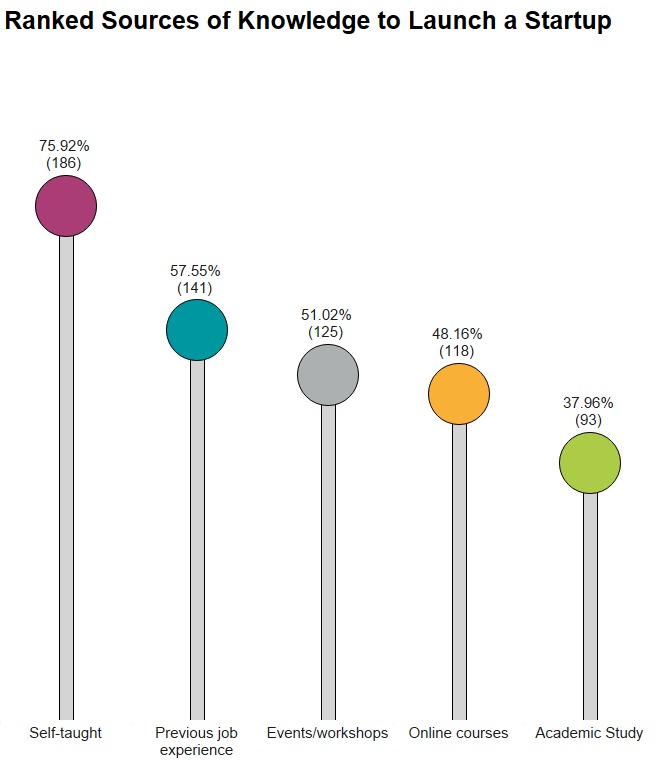 The survey found that the majority of founders chose to be self-employed as their main motive for launching their startup. Targeting a problem (with no existing attempts to solve it) was the second most chosen motive, and the need to improve the current service/product was the third most chosen motive. 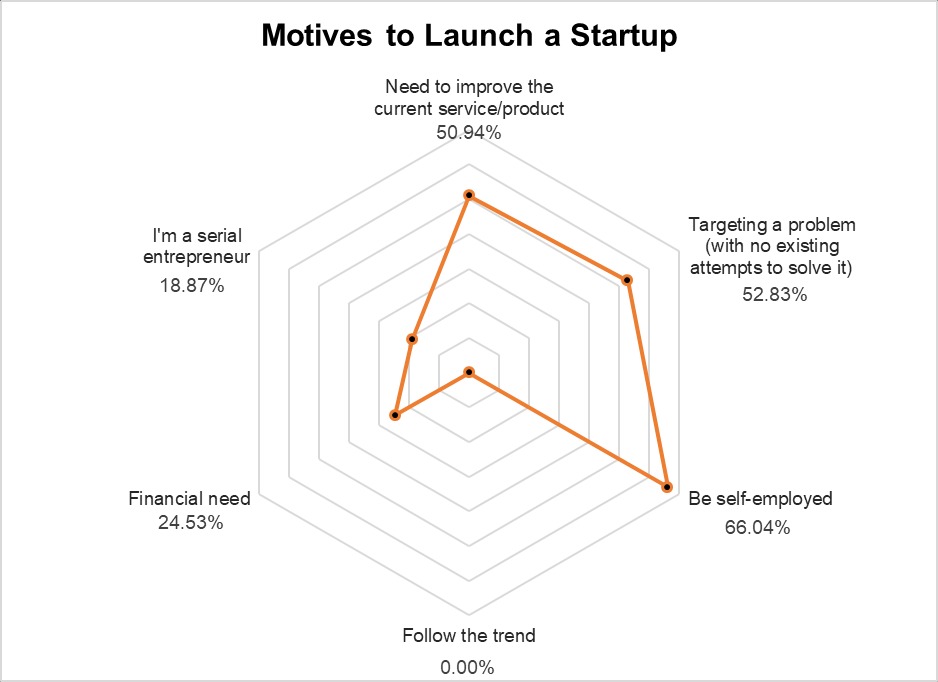 Having both online and offline channels still dominated the scene of startups, with 49.06% having both. But the gap with online-only startups has been reduced as more startups (than in the previous research) reported an online-only channel, with 47.17% of the respondents reported having an online-only presence. This could be attributed to the young nature of the current startups and could be a potential response to the COVID-19 pandemic. In contrast, current findings indicate a rise in single-owned startups compared to previous research.

The current findings are hopeful as most entrepreneurs used one tool or another to develop their ideas, and almost 90% of them run a testing phase to a variable extent. While in the previous research, around 39.02% did not use any tools, 29.27% used a business model canvas, and 26.83% used a business plan. This might be due to the increasing number of support organizations since 2020, which helped businesses follow a more comprehensive planning phase. There has been an introduction of 3 pre-incubation programs, 10 incubators, 5 accelerators, and 2 competitions. In addition to that, investments became more accessible and normalized with 6 companies/organizations being part of the ecosystem, pre and after 2020. 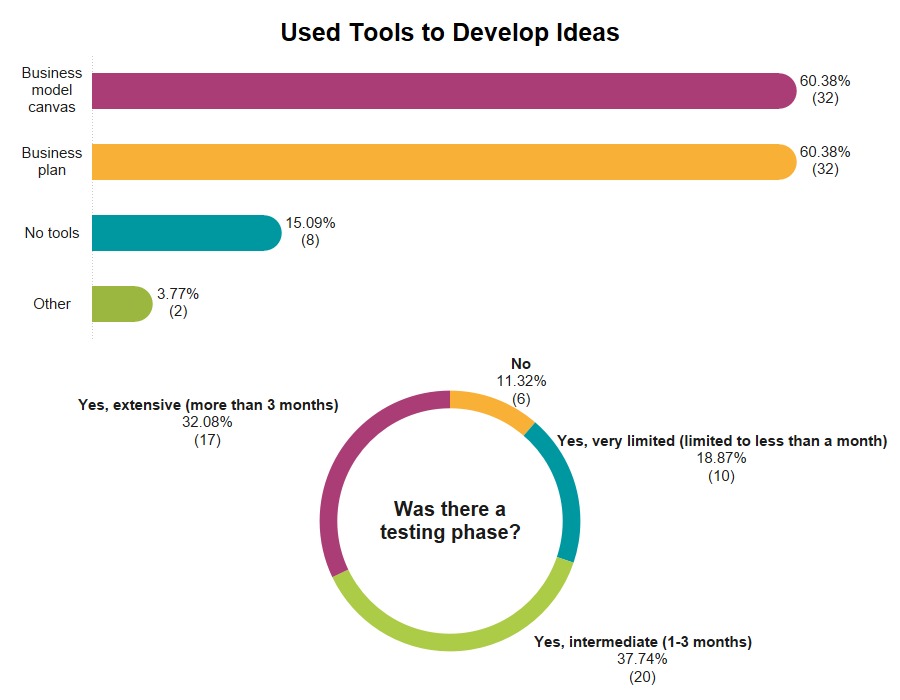 Working with Teams and Basis of Selection

Building a team is one of the most important aspects of building a successful business that is able to thrive and be sustainable. A team will be the one responsible for most of the day-to-day operations of the startup. There are many aspects to selecting the team. Most international trends view trustworthy team members as a major aspect of hiring. Our surveyed founders have chosen trustworthiness as their second most important basis for selecting team members, only proceeded by having different skills than the founders.

Around 73% of the surveyed founders choose relationships as their main hiring channel.

This is an indication that the Iraqi market is mainly based on networks. It emphasizes their importance and denotes the cultural aspects that come into play when building a team. As mentioned previously, the importance of trustworthiness ties neatly with professional networking. 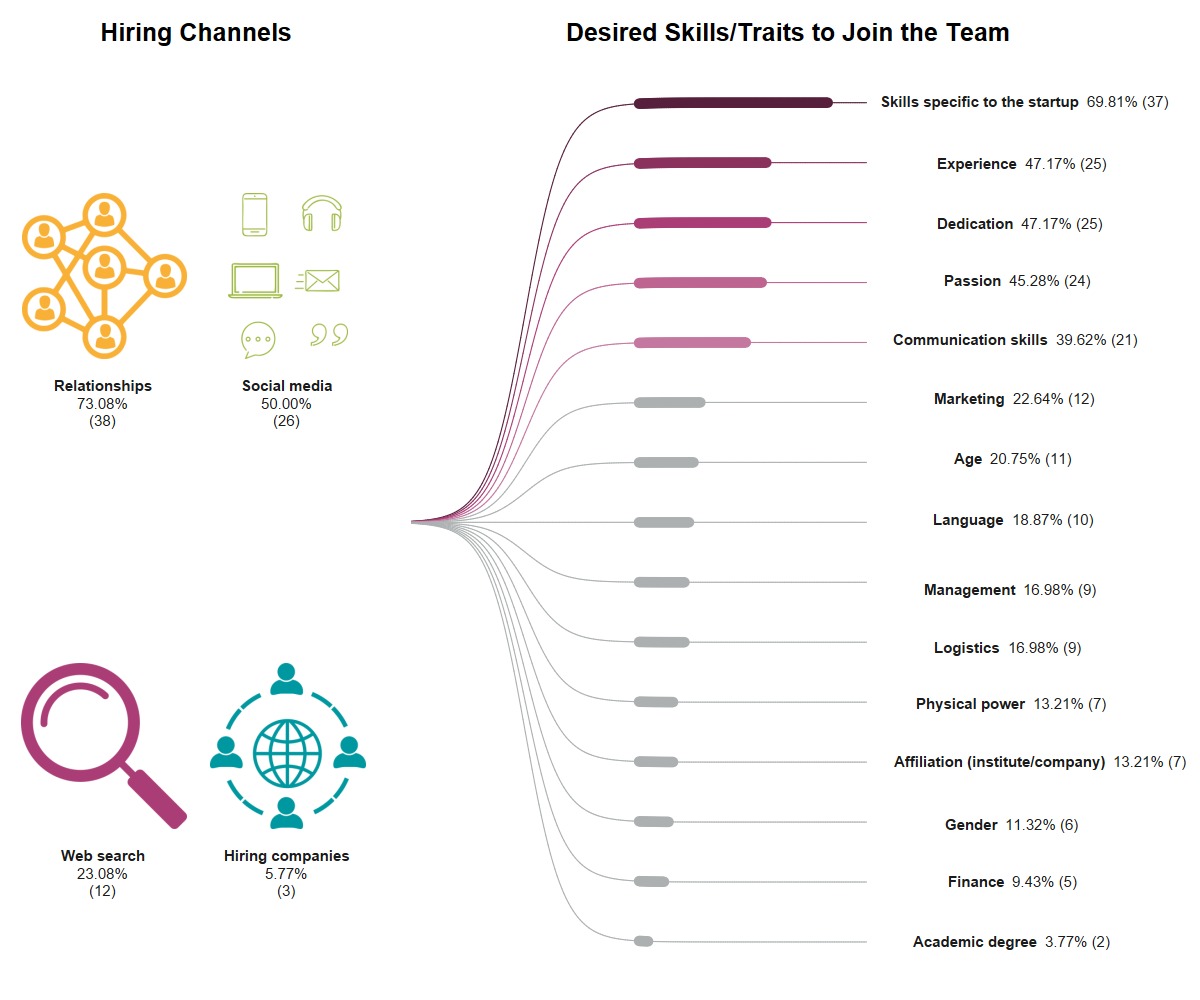 Registration is a procedure that any company has to go through in order to operate legally within Iraq. It is legally defined as “the process by which a company gets listed in the Registrar of Companies - Chamber of Commerce in order to finalize the establishment process, which grants it a separate legal entity. This enables companies to freely practice all economic activities as well as subjecting it to all the country’s laws in force.” There are many benefits to registering a company, including, but not limited to, preventing intellectual theft of the brand name, partnerships with companies and banks, obtaining a license to establish a company’s headquarters, and having more credibility to acquire customers. However, only 28.30% of respondents have registered their startups. When identifying the challenges of registration, around 58.5% of respondents attributed the challenges to the long process, 52% to the cost, and 41.5% to the taxes. It is noteworthy that respondents were allowed to state multiple challenges.

Interestingly, influencers dropped to fifth in the current findings. While the other three remained exactly in the same position as the best methods of customer acquisition. Worth noting that word-of-mouth and face-to-face were ranked equally by respondents. 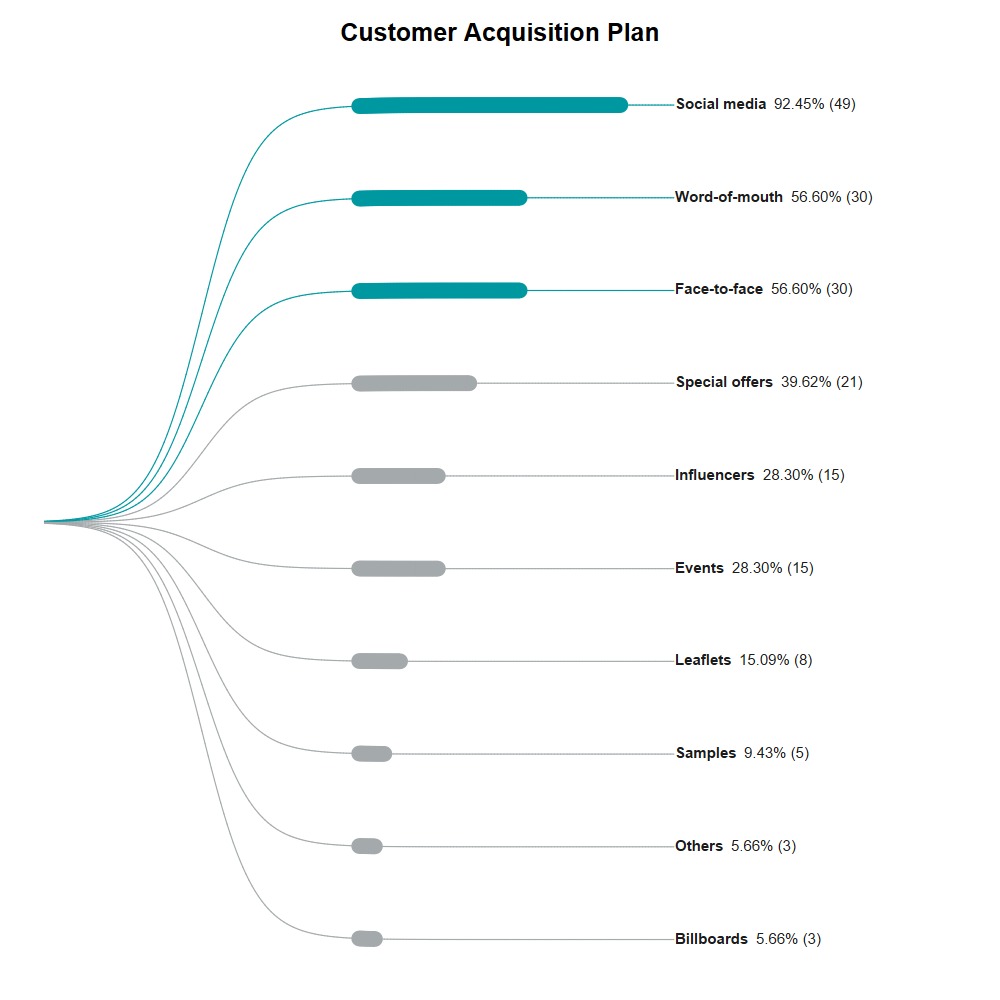 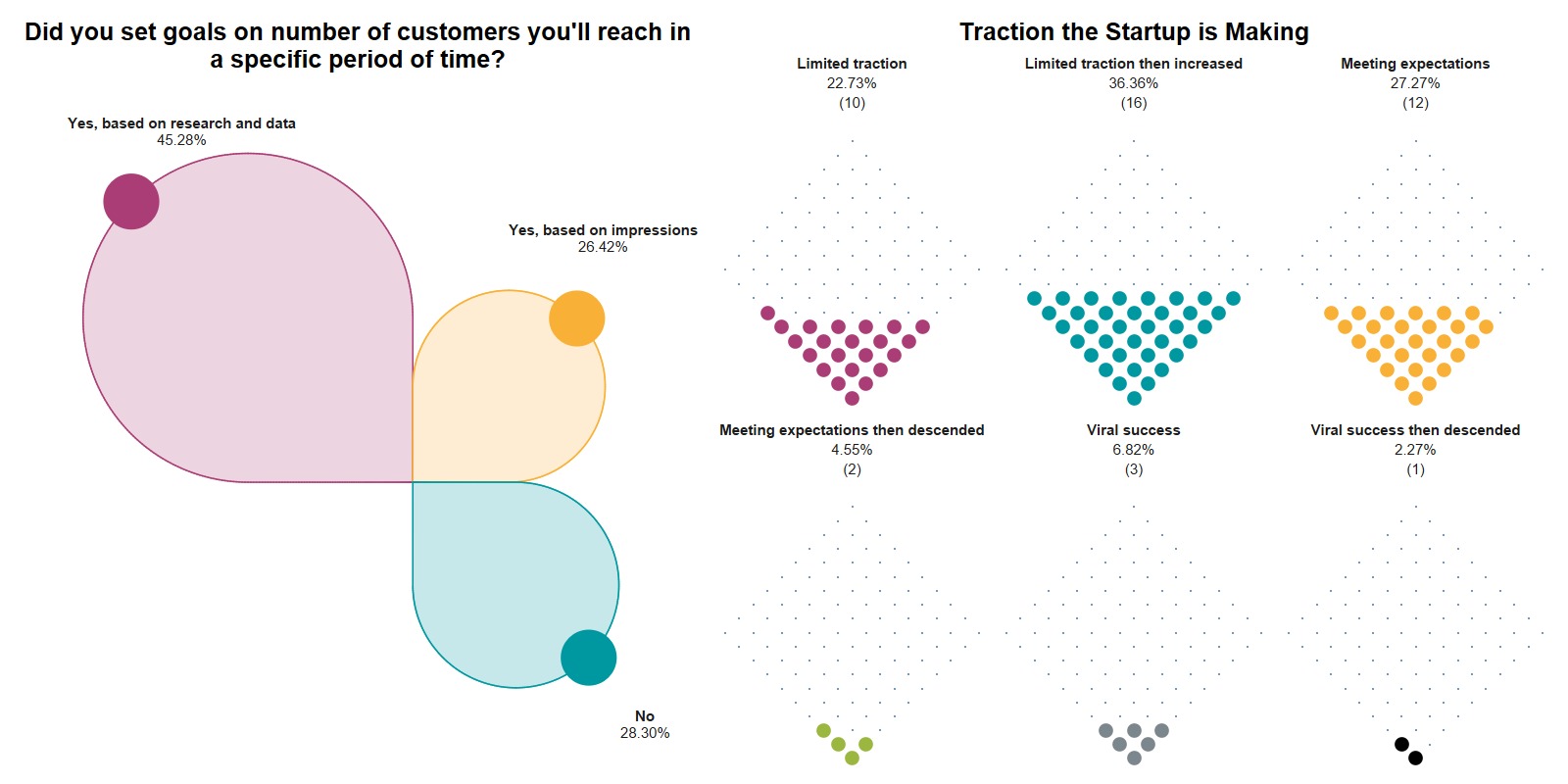 Scaling refers to the process of increasing revenues at a more rapid rate than costs. It allows a company to grow larger at a rapid rate because a relatively small investment is able to yield outsized returns, which can be reinvested to scale the business even further. The weak financial infrastructure in Iraq has pushed funding to be the main issue for scaling. The findings indicate that funding was the most prevalent challenge to scaling, followed by customer acquisition and partnerships. 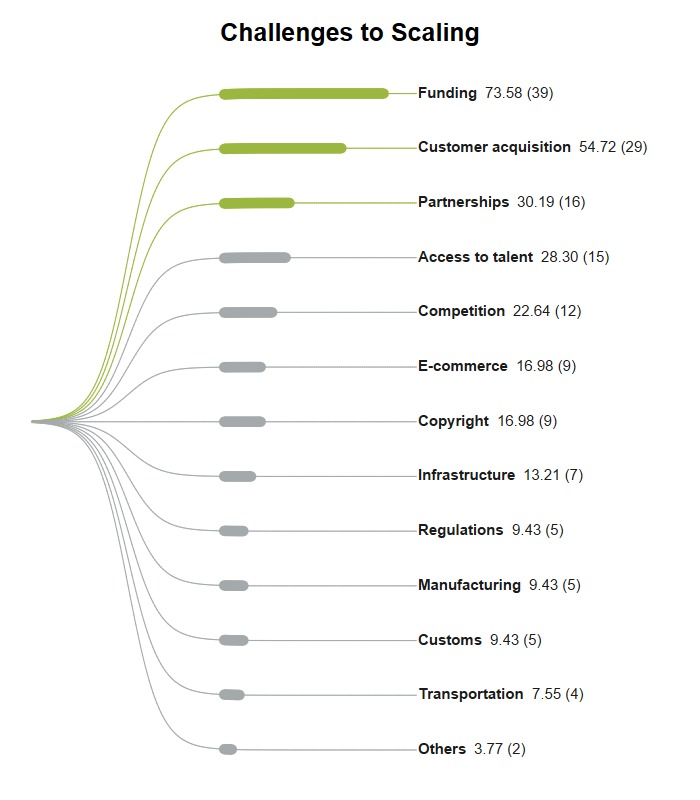 Self-funding is the most prevalent source of funding for our respondents. This is an indication of the actual lack of investment opportunities and seed capital funding in Iraq. To combat that lack, KAPITA launched the Iraqi Angels Investors Network (IAIN). IAIN is Iraq’s first angel group which comprises a cluster of distinguished Iraqi businessmen and entrepreneurs with the mission of providing support to the entrepreneurship ecosystem to revitalize the country’s private sector. 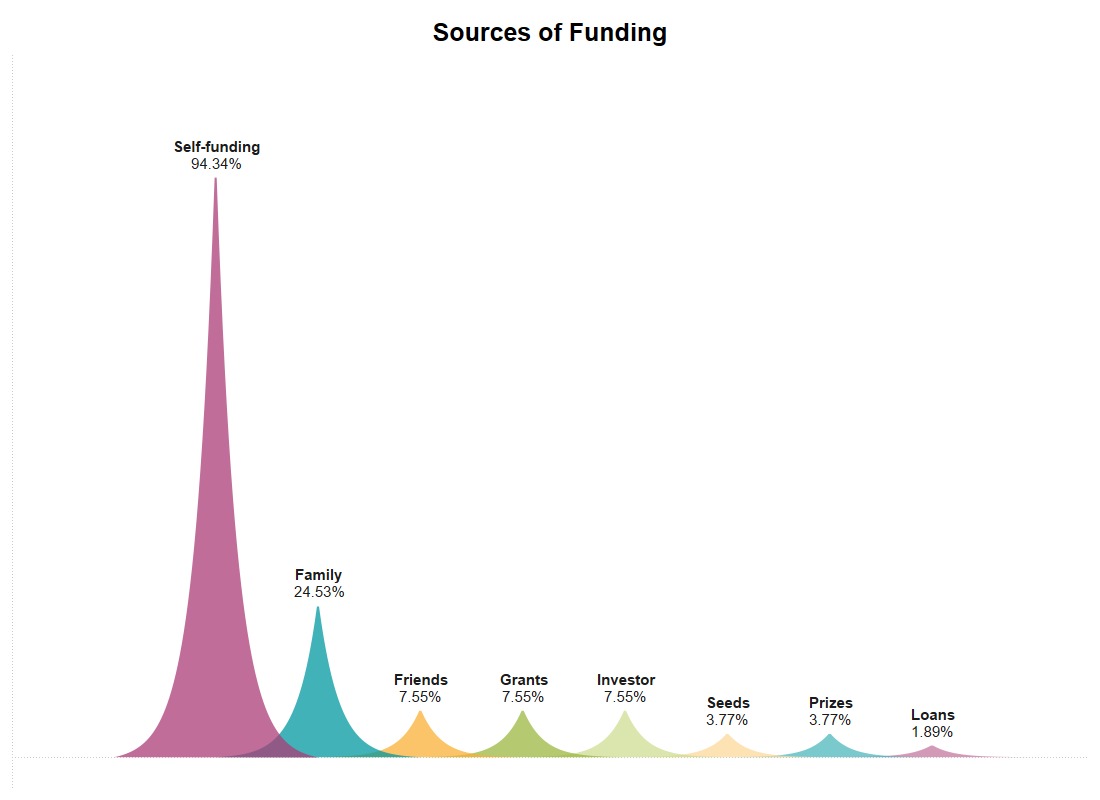 The majority of respondents are not seeking funding but planning to seek it in the future, which reflects the immaturity of the funding infrastructure of the country and the need for more improvement so it would be more appealing to the founders. In comparison, those who are actively seeking funds ranked second.

View the 7the issue of Business LANDSCAPE MAGAZINE